KTM Orange: The Color of the Day

Round 2 of the DMX Championship saw KTM Orange all over the track and pit areas. It was a sight that any KTM fan would cherish and a clear sign of the support from our customers. From bikes to quads and mini-cycles, it was KTM Orange all around.

And for those that are regulars at the DMX races, a familiar face seems to have moved on to the KTM Racing Team. The Red Bull athlete and local UAE motocross legend, Mohammed Balooshi, was seen riding a 2011 KTM 250 SX-F in MX2 and a 2011 KTM 450 SX-F in MX1.

Formerly riding a “red” bike in the series, Ben Menzies, has also moved on to a 2011 KTM 250 SX-F to compete within the MX2 class. 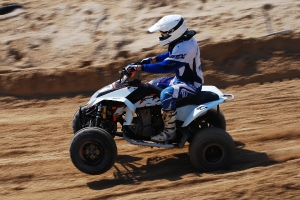 Another anomaly on the track, for the second time in the DMX season, former KTM Racing Team rider, Sebastian Husseini, was seen leading the Pro Quad pack of racers aboard a KTM 525 XC ATV sporting a white body kit.

Orange is the Dominant Color

In both MX1 and MX2 classes, Sam Sunderland swept through the track in familiar fashion and took top honors in both classes for the day. The young British rider looks to be leaner and meaner than ever, having changed his training regimen to a more stringent level, Sam is lighter, faster and much stronger than ever. The combination of Sunderland with the power and handling of the 2011 KTM SX bikes has been lethal to the competition thus far.

What You Need and Want

It’s clear from the sights in the paddock area that more and more riders are moving on to the KTM brand. It has been a long road to this point and the commitment of KTM-UAE to its customers, providing everything from a larger selection of bikes and quads, parts and accessories, riding gear, in stock at all times and rider and race support whenever possible, is beginning to become more apparent. And for the average rider, there’s nothing better knowing that KTM-UAE has all of what you want and need, at all times.